Breaking News
Acasă Extern Where the next war begins 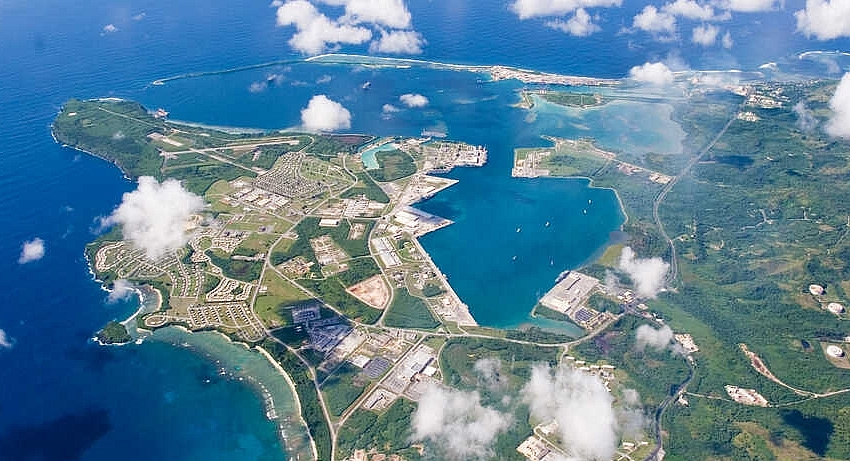 China and the United States are in conflict. Almost every military, political and economic analyst believes that if not resolved, it will lead to hostilities. Should that happen, Guam and the Commonwealth of the Northern Marianas Islands will be the first to know and feel the first blow.

The Attorney General William Barr, FBI Director Christopher Wray, both the Secretary of the Defense and the Chairman of the Joint Chiefs of Staff, and most recently, Secretary of State Mike Pompeo have all put China and its Communist Party on notice for its alleged espionage and unfriendly acts toward the United States.

Beijing is not happy, it has warned of serious repercussions to the U.S.-China relationship. China’s Ministry of Foreign Affairs has criticized what it calls “belligerent statements and acts” that are detrimental to bilateral ties.

Guam is a target

The small U.S. territory of Guam has become a focal point after North Korea’s army threatened to use ballistic missiles to create an „enveloping fire” around the island. The exclamation came after President Donald Trump warned Pyongyang of „fire and fury like the world has never seen.” Here’s a look at the U.S. military’s role on the island, which became a U.S. territory in 1898.

There are two major bases on Guam: Andersen Air Force Base in the north and Naval Base Guam in the south. They are both managed under Joint Base Marianas. The tourist district of Tumon, home to many of Guam’s hotels and resorts, is in between.

The naval base dates to 1898, when the U.S. took over Guam from Spain after the Spanish-American War. The air base was built in 1944, when the U.S. was preparing to send bombers to Japan during World War II.

Anderson Air Force Base hosts a Navy helicopter squadron and Air Force bombers that rotate to Guam from the U.S. mainland. It has two 2-mile long runways and large fuel and munitions storage facilities.

Altogether, 7,000 U.S. military personnel are stationed on Guam. Most are sailors and airmen. The military plans to move thousands of U.S. Marines to Guam from Okinawa in southern Japan.

China’s “hawks” have included war as among the repercussions. Thus, Guam is a target. Russia, China and North Korea have all in one way or another threatened Guam in the last 70 years. USA Today said in 2017 that “the people of Guam don’t want to be America’s target in Asia” after North Korean dictator Kim-Jong Un and President Trump exchanged heated words in the last crisis Guam faced.

However, like it or not, Guam doesn’t have a choice. Sam Goldsmith recently wrote in the US Naval War College Review that “In any potential high-intensity conflict with the United States —  particularly given that China already possesses a lethal array of long-range, conventional, theater-strike options.”  In the event of war with the United States in the Pacific, all published studies from China’s own military suggest that they would attempt to neutralize America’s forward deployed forces in Guam first, followed by Japan and those in the Pacific Ocean, Goldsmith explains.

“In carrying out this strategy, the PLA will employ each of its four subordinate service branches: the PLA Army, the PLA Navy (PLAN), the PLA Air Force (PLAAF), and the PLA Rocket Force (PLARF). PLAN submarines would execute undersea attacks against U.S. ships and submarines in port or at sea and strike at land targets with cruise missiles.”

China has at least two ballistic missile systems that are capable of reaching Guam. One, the DF-26, is a hypersonic nuclear warhead-capable missile developed in the late 1990s under the specific title “the Guam missile.”  It is similar to a weapons system copied by North Korea, which was the subject of the 2017 “War of Words” between the United States and North Korea that was defused in one-on-one meetings between the U.S. and North Korean leaders in Singapore in 2018.

“At the root of the current crisis with China, the Department of Justice has launched the strategic priority initiative to counter Chinese national security threats, the background of which include trade agreement violations under section 301 of the Trade Act of 1974, where China used unreasonable and illegal investment, espionage, computer intrusion, and economic aggression versus the United States and the world. China’s industrial policy according to the Department of Justice has been to illegally acquire intellectual property and technologies, and unfairly using military agents and unethical trade practices by any means to take over technologies and industries that are at the core of the United States’ economy.”

Attorney General Barr and FBI Director Wray have not just revealed these in statements or speeches, but have filed criminal charges in over 170 instances of violations of trade secret thefts, hacking, economic sabotage and espionage on US critical infrastructure and economic and financial markets.

The Attorney General set the following goals for the China Security Initiative:

Far and beyond the current issues of China’s failure to inform the United States on the Covid-19 pandemic, conflicts over telecom giant Huawei and its links to Chinese military and Ministry of State Security that gives China’s government backdoor access to the United States and global communications networks.

China’s undue influence in the U.S.

Issues over China’s undue influence in the U.S. entertainment industry in Hollywood, where the CCP has dictated content in recent movies and submitted scripts to present a revisionist history along party lines. The U.S. has also accused China of tapping applications such as TikTok and personal cellphones and other digital devices such as drones to gain access to American citizens’ digital information far and beyond what is allowed by U.S. law.

The federal government is also looking at Chinese investments, such as those in Guam and across the Asian Pacific, where they fear China’s military and the CCP are buying and bribing their way to control over vast areas of the region. China’s control of the supply chain during the pandemic of medical resources and pharmaceuticals have shown how the U.S. and its allies have lost control of key sectors that placed them at the mercy of China and its political dictatorship of the CCP are national security risks.

Will this latest conflict of ideology and economy between the United States and China go over the edge? It is hard to say. Democratic presidential candidate Joe Biden has already expressed concern, along with other Democratic party leaders, over the current administration’s increasing belligerence towards China, to which Trump administration officials point to Joe Biden’s son Hunter, and his managing of a $1.5 billion hedge fund financed by a Chinese government bank as an indicator that the former vice-president’s soft views on China may be suspect.

China was forced to shut down its consulate in Houston, Texas after the United States claimed it was a center of espionage and digital influence interference in U.S. domestic affairs.

The Democrats and Republicans in both houses of Congress have also been increasingly concerned over China’s impact in politics and media in the US in regards to its treatment of pro-democracy news in Hong Kong, as well as human rights violations by China in Tibet and its northern Muslim majority region.

80% of China’s major foreign exports going to the US

China and the United States’ economies are intertwined with 80% of China’s major foreign exports going to the US amidst a global recession and near economic collapse of many markets due to the global pandemic. The harsh rhetoric and ideological conflict are pushing toward a precipice.

Neither country would seek open conflict or warfare in the best of times, but in the current global condition and uncertainty, one push in the wrong direction could send everything crashing over the edge into an abyss as deep as the Marianas Trench.