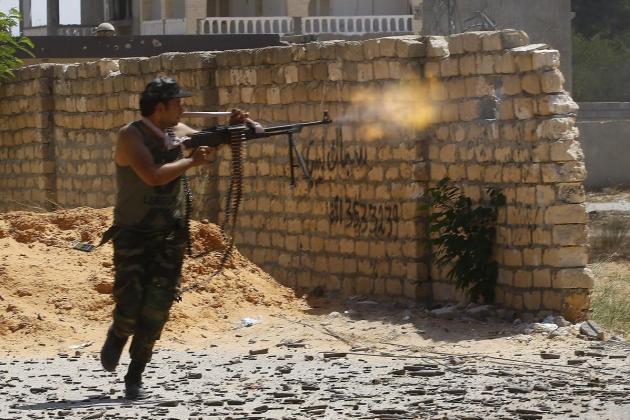 After four years of behind-the-scenes financial and tactical support for a would-be Libyan strongman, Russia is now pushing far more directly to shape the outcome of Libya’s messy civil war. It has introduced advanced Sukhoi jets, coordinated missile strikes, and precision-guided artillery, as well as the snipers — the same playbook that made Moscow a kingmaker in the Syrian civil war.

The Russians have intervened on behalf of the militia leader Khalifa Hifter, who is based in eastern Libya and is also backed by the United Arab Emirates, Egypt, Saudi Arabia and, at times, France. His backers have embraced him as their best hope to check the influence of political Islam, crack down on militants and restore an authoritarian order.

Mr. Hifter has been at war for more than five years with a coalition of militias from western Libya who back the authorities in Tripoli. The Tripoli government was set up by the United Nations in 2015 and is officially supported by the United States and other Western powers. But in practical terms, Turkey is its only patron.

The new intervention of private Russian mercenaries, who are closely tied to the Kremlin, is just one of the parallels with the Syrian civil war.

The Russian snipers belong to the Wagner Group, the Kremlin-linked private company that also led Russia’s intervention in Syria, according to three senior Libyan officials and five Western diplomats closely tracking the war.

In both conflicts, rival regional powers are arming local clients. And, as in Syria, the local partners who had teamed up with the United States to fight the Islamic State are now complaining of abandonment and betrayal.

The restive coastal province of Cabo Delgado in northeastern Mozambique doesn’t often make international headlines. Before the surprise discovery in 2011 of what is believed to be one of the world’s largest offshore natural gas reserves, Cabo Delgado was a sleepy little getaway mostly known for its quiet beach towns. That changed late last week when militants from a newly formed branch of the Islamic State reportedly killed seven Russian soldiers believed to be fighting on behalf of the Wagner Group, the shadowy, Kremlin-backed private military contractor.

In some ways, the fact that an energy-rich part of East Africa riven by deep social, economic and political inequalities has become fertile ground for a homegrown ISIS affiliate is not all that surprising. Nor is it surprising that only a few months after Mozambique’s president, Felipe Nyusi, inked a multimillion-dollar energy and security deal with Russian President Vladimir Putin, Wagner Group contractors were apparently dispatched to Cabo Delgado to ostensibly stamp out the Islamic State and other Islamist extremists, who have been waging an increasingly virulent anti-government insurgency.

Much like in Libya, where the activities of the Wagner Group have also recently grabbed headlines, the Kremlin’s global business model as applied in Mozambique is predicated on moving fast, breaking things and capitalizing on the failure of autocratic regimes to govern and secure their own territory. In the lead-up to Mozambique’s recent elections, insurgents mounted dozens of attacks, while violence continues to roil the country despite a peace accord between Nyusi’s Frelimo party and Renamo, the former rebel group turned main opposition party. Nyusi, who was reelected apparently with a little help from the Wagner Group’s cyber counterpart, the Internet Research Agency, is only one of the growing list of Kremlin clients in Africa with leader-for-life ambitions, according to a report released last week by the Stanford Internet Observatory.

Sadly, it is this kind of instability that the Wagner Group thrives on. Russian private military contractors are critical conduits between repressive regimes and various subsidiaries of Russia’s state-owned arms conglomerate Rostec, as well as major state energy companies such as Stroytransgaz and Gazprom. As seen in Syria, Russian contractors also frequently play an important role in helping imperiled dictators reclaim energy-rich territory and safeguarding future Russian investment.

Yet the speed with which Russia seems to be able to mobilize these private armies continues to stun and befuddle policymakers in Washington. During a briefing on Capitol Hill sponsored by the bipartisan U.S. Helsinki Commission early this week on Putin’s “shadow warriors,” it became abundantly clear that the number of unknown unknowns about the Wagner Group far outweighs the known unknowns.

If there is one thing that I’ve learned while researching Russian private military contractors over the past year, it’s that decoding how the Wagner Group fits into Russia’s proxy war strategies is far from easy. It’s even harder to understand how the Wagner Group and its titular head, Yevgeny Prigozhin, fit into the big picture when there is so little consensus among experts about what Russia really hopes to get out of its forays into the mercenary market.

The U.S. national security establishment is only just catching on to the risks of dangerous escalation posed by Russia’s use of private military contractors on the frontlines of today’s proxy wars. Without more creative thinking about how to deal with those challenges, there are serious limits on what the U.S. can do to confront them.

The mythos surrounding the Wagner Group only bolsters Putin’s strategy for claiming a top slot in an evolving multipolar world order.

There is one bright spot, however. The U.S. Treasury Department’s Office of Foreign Asset Control has done its level best recently to try to cut off the hydra-headed network of financiers and shell companies that Prigozhin uses to manage Kremlin-backed covert paramilitary operators. But the Treasury Department lacks the requisite legislative authorities to expand sanctions against affiliated entities. It also lacks the kind resources and staffing needed to support extensive open-source research that could crack the code on the sprawling reach of Russian state enterprises that form the primary client base of detachments like the Wagner Group.

Many Western analysts and news outlets tend to see the Wagner Group as part of an intentional “chaos strategy” that has the twin objectives of enhancing Russia’s ability to project power and consolidating Kremlin power at home. As Oxford University’s Andrew Monaghan has pointed out, this scenario casts Putin as both a calculating grandmaster singlehandedly influencing strategic outcomes through “hybrid warfare” and a skillful conductor harmonizing all the elements of government around those pursuits. In contrast, others, like Lawrence Freedman, the eminent military historian at King’s College London, suggest that while Putin has a strategy informed by an overall commitment to the paradigm of “limited war,” Russia’s military engagement in Ukraine and Syria undermine his arguably higher goal of being readmitted to the great powers “club.”

In either case, Prigozhin, a longtime Putin associate and oligarch, is a key actor in this scenario—but in a supporting role. Although the man known as “Putin’s chef” is often portrayed as a wily mastermind—deploying the Wagner Group to the latest civil war, or sponsoring the internet trolls who tried to tip the 2016 U.S. presidential election—there are reasons to be cautious about overestimating the breadth and depth of his influence. Prigozhin does represent a new chapter in the post-Soviet evolution of Russia’s military-industrial complex, but he is only one figure amid the wider array of state-owned companies that are likely the primary paymasters of Russia’s paramilitary contractors.

The Wagner Group and others like it play multiple roles on multiple levels in Russia’s proxy war strategies. They provide targeting intelligence, training and logistical support; protect key infrastructure; and backstop proxy militias and paramilitary groups in hot spots from Ukraine and Syria to Libya and Mozambique—to name a few. Their covert operations, real and imagined, are also critical in shaping Russia’s strategy for escalation management as well as its relations with both adversaries and allies. Kremlin denials about these contractors’ operations are purpose-built for strategic deception.

Given how central deception has been to Russian military doctrine historically, how does the Wagner Group itself fit into the bigger picture of a strategy of coercion? On one hand, its mercenary activities increase ambiguity about the nature of the relationship between the group and its sponsors. On the other, narratives about the Wagner Group as a kind of ghost army, while compelling, may ultimately cloud how Russian military contractors really operate and fit into Putin’s proxy strategies. This ambiguity is at the heart of Russia’s concept of using disinformation and deception to assert reflexive control over its adversaries by sowing confusion about its own goals.

Since a primary objective of proxy warfare is to enhance the ability to project power by expanding influence while lowering the risk of retaliation, the strategy benefits from making the sponsor-proxy relationship inherently ambiguous. Ambiguity can grant proxy sponsors significant, if sometimes short-lived, advantages, permitting certain tactics to go unchecked by rivals—as demonstrated by the initially discombobulated European and American response to Russia’s use of private military contractors in Ukraine.

By “hiding the real” and “showing the false,” in the words of the late military analyst Barton Whaley, the Kremlin gains three distinct but interrelated tactical advantages. First, as seen in the case of Ukraine, misdirection around the patterns of deployment of thousands of Russian operatives led to force-multiplying surprise. Second, the surprise mobilization of Russian military contractors in Crimea bought time for covert deployments to eastern Ukraine, speeding up territorial control and boosting Russia’s military advantages. Third, at least initially, surprise and speed in both Ukraine and Syria fed the narrative that Russia was prepared to change the facts on the ground, giving it considerably more room to maneuver at the diplomatic level in the early stages of both conflicts.

All these tactical advantages have helped Putin promote the perception that Russia has restored its great-power status. The mythos surrounding the Wagner Group only bolsters Putin’s three-pronged strategy for claiming a top slot in an evolving multipolar world order: drive a wedge into the trans-Atlantic alliance, revive relations with former Soviet client states like Mozambique, Syria, Libya and Sudan, and project power beyond Russian borders. Private military contractors are the frontline agents of this opportunistic grand strategy.

Whatever its effect on the outcome, the Russian intervention has already given Moscow a de facto veto over any resolution of the conflict.