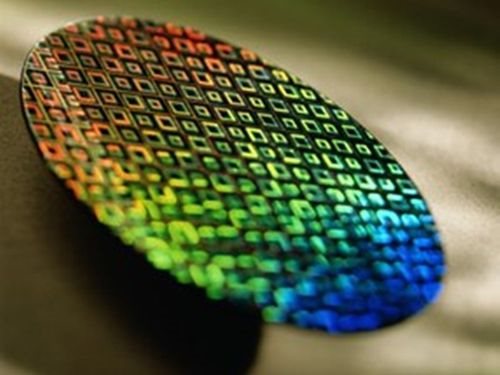 A chip produced at TSMC

As trade tech tensions mount between the U.S. and China the U.S. semiconductor industry fears a tech cold war could disrupt the global supply chain. Now companies on both sides of the Pacific are trying to develop strategies to mitigate risk — whether it be hoarding supplies or looking at shifting the location of production facilities.

Two bills combined as an amendment to the National Defense Authorization Act aim to provide federal financial incentives to build semiconductor manufacturing plants in the U.S. and help fund R&D.

As trade tensions mount between the U.S. and China, the U.S. semiconductor industry fears a tech cold war could disrupt the global supply chain. Now companies on both sides of the Pacific are trying to develop strategies to mitigate risk — whether it’s hoarding supplies or looking at shifting the location of production facilities.

Trump administration announced that it is considering imposing export restrictions on Semiconductor Manufacturing International Corporation, China’s largest manufacturer of semiconductors. That’s the latest crackdown by Washington as it tightens restrictions against Chinese tech companies such as Huawei, preventing them from obtaining chips without a special license.

The issue prompted SEMI, an industry group, to draft a letter for Commerce Secretary Wilbur Ross explaining how blacklisting SMIC could hurt the U.S. tech industry, Reuters has reported. “We urge the Department to carefully consider the immediate and long-term detrimental impacts to U.S. industry, economic and national security that may result from the addition of SMIC to the Entity List,” said the group, which has 2,400 members worldwide, including SMIC and U.S. chip equipment makers Lam Research Corp  and Applied Materials.

While some U.S. firms such as Intel and Micron Technology still make chips in the United States, the industry’s center of gravity has shifted to Asia, where Taiwan Semiconductor Manufacturing Co (TSMC) has more than half of the overall market for contract manufacturing chips and an even stronger hold on the most advanced chips. Firms, including iPhone maker Apple, Qualcomm and Nvidia all rely on TSMC and other Asian foundries to manufacture their chips.

Untangling the global supply chain in this interconnected industry is not feasible – at least in the foreseeable future, industry experts concur. Components for a chip could travel more than 25,000 miles before completion and can cross borders more than 70 times before a final product is delivered to the end customer, explains Syed Alam, Accenture’s global semiconductor practice lead.

Industry sources believe the best way to address the issue is to bring back more domestic manufacturing, develop a robust industry ecosystem, invest more in R&D and maintain America’s lead in advanced product design. An amendment to the National Defense Authorization Act shows Washington recognizes that boosting domestic manufacturing and R&D is key for national security and global competitiveness. The U.S. share of global semiconductor manufacturing capacity has been cut in half to just 12% over the past 20 years and is forecast to fall to 10% by 2023.

The amendment was a compromised version of two bills that have bipartisan support. The CHIPS for America Act which stands for “Creating Helpful Incentives to Produce Semiconductors,” creates a 40% investment tax credit for semiconductor equipment, a $10 billion fund to match any chip manufacturing incentive programs at the state level, and $12 billion in R&D funding to be allocated over the next five to 10 years.

In addition, it provides support for semiconductor-based research grants to U.S. universities or private companies, either directly or through agencies like the Defense Advanced Research Projects Agency (DARPA). It also calls for the creation of a National Semiconductor Technology Center, which could serve as a clearinghouse and organizational control point for U.S.-based chip manufacturing, as well as a critical new research and development facility.

The other bill was the American Foundries Act, which authorizes the Department of Commerce to offer $15 billion in grants to states to assist in  the construction, expansion, or modernization of microelectronics fabrication, assembly, test, advanced packaging, or advanced research and development facilities. It also would give $5 billion in federal investments to promote semiconductor research at the Department of Defense, National Science Foundation, Department of Energy, and the National Institute of Standards and Technology. The bill also mandates that the White House Office of Science and Technology, in coordination with federal research agencies and the private sector, develop a plan to guide funding for advancing next-generation semiconductors.

“We believe these grants and incentives are critical for the U.S. semiconductor industry especially for state-of-the-art advanced technology,” says Jeff Rittener, chief government affairs office at Intel. “We need help from the U.S. government to create a level playing field.” As he explains over time U.S. manufacturing stateside has been shrinking and that puts the country at risk since America will be reliant on foreign sources on the brains that run modern technology.

High hurdles for the industry

These incentives are key considering chip factories can cost up to $15 billion to build, with much of the expense in the form of pricey tools. China and many other countries have spent billions of dollars bolstering their domestic chip manufacturing industry and they offer tax and financial incentives to lure foreign manufacturers. In the Made in China 2025 Plan, the Chinese government has committed $120 billion to shore up domestic semiconductor manufacturing with the goal of producing 70% of all chips need for local consumption.

According to a recent report from the Semiconductor Industry Association in partnership with the Boston Consulting Group,  robust federal incentives valued at $50 billion would create as many as 19 major semiconductor manufacturing facilities and 70,000 high-paying jobs in the U.S. over the next 10 years. Strengthening U.S. chip manufacturing will help ensure America out-innovates the world in the strategic technologies of the future — AI, 5G, quantum computing — that will determine global economic and military leadership for decades to come.

“The country that leads in advanced chip research, design, and manufacturing will have a big leg up in the global race to deploy new game-changing technologies, such as 5G, artificial intelligence, and quantum computing,” said John Neuffer, president and CEO of the Semiconductor Industry Association. “Leaders in Washington should seize this opportunity, level the global playing field to attract chip production, and invest boldly in domestic manufacturing incentives and research initiatives that will strengthen U.S. tech leadership for decades to come.”

“The U.S. has always had a tremendous lead in thought leadership and intellectual property in the semiconductor industry but now China poses a real threat since they are subsidizing a tremendous amount in R&D,” says Bob O’Donnell, president and chief analyst of TECHnalysis Research. Chinese government is currently making aggressive subsidized investments in building over 60 semiconductor manufacturing plants (commonly called foundries or “fabs”, which is short for fabrication sites).

Some companies are mulling over how to expand operations in the U.S. According to Rittener, Intel is investing in expanding at its locations in the U.S.  It has hired 3,000 new employees and is getting ready to open a new microprocessor plant in Chandler, Arizona.

“Intel has also had conversations with the U.S. government about developing a foundry for advanced semiconductors,” Rittener says, “but there are no concrete plans yet.”

In May, Taiwan Semiconductor Manufacturing Corp. – a big supplier for Apple and Huawei — announced it was investing $12 billion to build  a second U.S. manufacturing plant in Arizona. The factory will be focused on producing so-called 5-nanometer chips, the latest in semiconductor technology being manufactured today. Construction will begin next year;  it’s expected to be operational in 2024.

For Huawei, the world’s biggest smartphone maker, the trade war has taken a toll. The company, which bought $20.8 billion worth of chips last year, has been hoarding chip supplies because of U.S. sanctions and gradually shifting design and chip production to mainland China.

The U.S. has accused Huawei of building backdoors into network infrastructure, ostensibly to aid Chinese government spying efforts, which Huawei has denied. Despite those denials, the Trump administration placed Huawei and 114 of its affiliates on its Entity List in May 2019, which meant US firms were unable to sell technology to the company without explicit US government approval. Since then the entity list has grown to include 150 companies. In May, the US Commerce Department issued an amended export rule to block shipments of semiconductors to Huawei to “strategically target Huawei’s acquisition of semiconductors that are the direct product of certain US software and technology.”

That rule prevented foreign manufacturers of semiconductors who use American software and technology in their operations from shipping their products to Huawei unless they first obtained a license from the US. Taiwan Semiconductor Manufacturing Co. (TSMC), the largest semiconductor manufacturer in the world, reportedly halted orders for Huawei’s HiSilicon unit in May following the new U.S. rule.

Now industry observers worry about any retaliation from China. “Given such sanctions significantly impact Huawei, there could be retaliation from China,” said Sebastian Hou at CLSA, according to Ars Technica. He named Apple, Huawei’s competitor in the smartphone market, and Qualcomm as potential targets.

Others industry titans continue to diversify operations in other parts of the globe. Last month, Nvidia announced a $40 billion deal to buy Arm Holdings from SoftBank. Arm designs the architecture for mobile chips used in almost every mobile device in the world, from the Apple iPhone to just practically every Android device. For Nvidia, whose chips are widely used to support graphics and artificial intelligence applications, including for self-driving vehicles, the deal will help boost its data center business.

While large manufacturers have the financial wherewithal and industry connections to navigate through disruptions in the supply chain, many small and mid-size tech manufacturers in the U.S. do not.

One is Social Mobile, a Miami-based consultancy and OEM that specializes in making customized Android Enterprise devices for Fortune 500 companies. The company, which also has operations in San Francisco, Hong Kong and Shenzhen, China, started seeing disruptions from suppliers in February and the situation is getting worse.

“There has been a shakeup in the industry,”  says CEO Robert Morco. “There are longer lead times for procuring semiconductors and prices have also risen. In some cases it takes double the time to get supplies. Some suppliers are only making them available for key clients. That has forced many companies to go to the grey market for chips.”

According to Morcos, “the big guns will get through this, but it’s harder for small and medium-sized businesses. We are feeling the impact of this trend the most. We are the ones that are being affected by a lack of transparency, price gauging and the lack of product availability.”

To navigate the crisis, Morcos says Social Mobile is asking customers to place orders early due to delays. Looking ahead the company is looking at building a plant in the U.S. with some sort of government support. “There is a lot of local, state and federal interest in onshoring semiconductor manufacturing right now, so we feel we are in the right place at the right time,” says Morcos.

O’Donnell notes that many of his clients are looking at U.S.-China trade and geopolitical tensions and its making semiconductor companies nervous. “There is a lot of saber-rattling going on right now between China and Taiwan,” he notes.

“This has tech companies in many industries rethinking their semiconductor roadmap,” says Alam. As he explains, the U.S. just doesn’t need to build more chip plants, it needs to build an entire semiconductor ecosystem and attract the talent it needs to maintain the industry’s competitive edge.

“It would be great to bring more manufacturing home,” says Gene Sheridan, CEO of Navitas Semiconductor, a start-up in El Segundo, California, that manufactures next-generation gallium nitride power chips in Taiwan and the Philippines for companies like Lenovo, AUKEY and Anker.