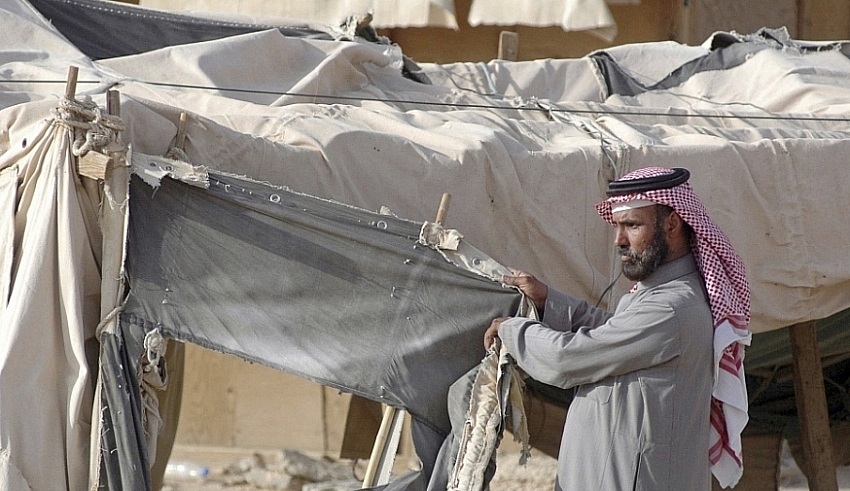 The coronavirus pandemic is the fourth major crisis to hit the Arab region in a decade. The first three—the 2011 Arab uprisings, the 2014–2016 decline in oil prices, and the 2019 protests in Algeria, Iraq, Lebanon, and Sudan—shook the foundations of the old Arab order. This latest crisis may yet put the final nail in the old order’s coffin.

The pandemic has further accentuated fundamental weaknesses of the old Arab order and with it the region’s once dominant authoritarian bargain. Arab governments engaged in lavish social spending, fueled directly or indirectly by oil revenues, and in exchange, societies acquiesced to authoritarian rule and a sense of stability and order. With no stability, no order, and no money, that bargain is collapsing.

The pandemic’s economic impact will be seismic

The International Monetary Fund (IMF) estimates that gross domestic product (GDP) in the Middle East will shrink 4.7 percent. Fragile countries or those in conflict will likely face an even greater decline. On which most fragile countries in the region rely, are expected to tumble by at least 20 percent due to a decline in global growth. Given falling prices and demand for oil, oil-exporting countries are likely to see especially large negative fiscal balances. Prospects for a quick recovery are slim.

It will now be even harder for Arab governments to address perennially high unemployment in the region, where almost half the population is under the age of twenty-five and average unemployment was already nearly twice the global average. Massive job losses have pushed many workers below the poverty line, particularly those in the informal sector.

The ravages of war on countries such as Libya, Syria, and Yemen have left them dangerously exposed to the aftershocks of the pandemic. They are in economic freefall, while medical shortages and lawlessness amplify their fragmentation and trigger humanitarian crises.

In most Arab states, citizens have little trust in government and perceive high levels of corruption and inequality. To ensure that citizens accept the pain associated with post-pandemic austerity, Arab states must provide venues for them to voice their concerns and participate in decision-making. Even well-considered plans will provoke civil unrest if citizens are asked to sacrifice more without being treated as partners in shaping their future. Such a process will require negotiating new social contracts and developing systems of checks and balances that strengthen the legislative and judicial branches of government at the expense of the executive.

The end of the oil era in the Arab world

Decades of emphasis on rote learning have denied countries innovation opportunities and a chance to build knowledge societies and thriving economies. Rote learning was believed to result in passive citizens; instead, it produced frustrated generations that ended up in the streets.

The end of the oil era in the Arab world means that oil-producing countries can no longer sustain a welfare state model. Oil killed productivity and merit. It allowed for the establishment of inflated public sectors that were often used as instruments of patronage and clientelism. It also hindered much-needed processes of political and economic reform by promoting a culture of no taxation and no representation. Oil-importing countries, in turn, can no longer rely on Gulf largesse to sustain their inefficient economic systems.

Unless citizens are given a credible voice, their distrust of institutions will continue to grow. With most of the region’s political elite reluctant to implement more inclusive governance, Arab citizens will continue their collective bottom-up push for reforms. These reforms include revising election laws, where they exist, to ensure proper participation and representation; creating councils that allow citizens to participate in political decision making and social and economic recovery plans; and recognizing and upholding freedom of the press and the right to information.

Arab governments will have to build more inclusive economies while operating under greater fiscal constraints. Recent studies indicate that Arab countries are the most unequal in the world with regard to income and opportunity. Accordingly, Arab governments need to rethink their economic models and the role of the state in economic activity.

An inclusive approach means providing essential health, education, and transportation services at reasonable costs to citizens, while withdrawing states from their traditional roles of providing jobs and subsidizing commodities.

Other policies associated with such an approach include providing macroeconomic stability, diversifying economic activity away from oil and services, building human capital through education and training, encouraging international trade, and relying on merit to raise productivity. To do so, governments must facilitate the establishment of small and medium enterprises and allow the private sector to become the main provider of jobs and the key engine of economic growth.

Governments also need to promote transparency, including easy access to information about laws and regulatory requirements for government contracting, subsidies, privatizations, and public land transactions. Outside donors—including the United States, the European Union, the IMF, and the World Bank—should prioritize transparency and anticorruption measures when deciding on the form and function of aid and loans to Arab states.

In the twenty-first century, the wealth of nations will be measured by their human capital. The Arab world is populated by myriad ethnicities and religious communities, a diversity that should be a source of strength. Yet not all communities enjoy the same rights, and those disparities have kept the region from realizing its full potential.

Conflict has driven millions of people to seek refuge away from their homes and often outside of their countries. Today, the greatest share of the world’s refugees and internally displaced people are from the Middle East and North Africa, even though the region accounts for only 6 percent of the global population. As a result, it is losing decades of development gains, especially as health and education continue to lag.

Changing demographics offer some hope for breaking old barriers and bringing new dynamism. But this will require governments to treat citizens as integral partners in rebuilding their societies, not as potential threats who need to be coerced. The rights of citizens from all religious and ethnic groups, and those of refugees, must be recognized equally.

Past experience has shown that Arab governments are unlikely to take the necessary measures, which will encourage potentially destabilizing demands for bottom-up change. The central question of the moment will be whether Arab states and the international community can channel those demands into constructive change that preserves order and expands prosperity. A more inclusive Arab region would make for a more prosperous and stable global community.

The Arab uprisings voiced a clear demand for political freedoms and social justice. But they were unable to articulate a coherent vision for achieving them.

In the post-pandemic world, reconciling those demands through collective effort has become imperative. Bold changes will require fundamental shifts in the way the region is governed. As difficult as such changes might be, without them the region will simply be unable to function properly in the global order while maintaining stability at home.

Since 2011, respect for state sovereignty has eroded in the absence of an effective regional stabilizer. The conflicts in Libya, Syria, and Yemen are all cases in point. The dearth of regional dispute mechanisms and diplomatic protocols has led to catastrophic levels of conflict, devastation, and human suffering. Arab economic integration would also have a demonstrably positive effect on economic productivity, while reducing unemployment and poverty.