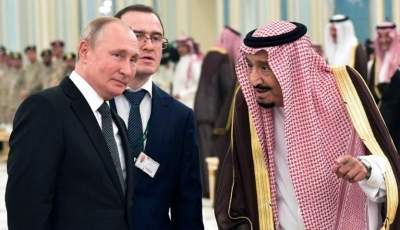 Considering the prospects for trade, Washington shouldn’t yet be concerned by the growth of Russian influence in the Gulf. It’s obvious, however, that Arab countries are being increasingly proactive in diversifying their connections. Moscow is simply making use of this to gain economic and political advantages.

Russian President Vladimir Putin’s first visit to Saudi Arabia in twelve years took place on October 14 amid the latest flare-up of tensions in the Gulf, where Riyadh and Tehran are on the brink of war. Having withdrawn its troops from Syria, Washington is now focusing its attention on the Gulf. From an economic standpoint, Russia cannot hope to rival the United States in the region, but Moscow’s increased activity in this area of U.S. interests is arousing suspicion in Washington.

In the year that has passed since the shocking murder of the Saudi journalist Jamal Khashoggi, a columnist for the Washington Post, U.S. President Donald Trump has had to defend the continuing close cooperation between Washington and Riyadh on more than one occasion, both to Congress and to ordinary Americans. One of his main arguments was the risk of Russian-Saudi ties being brought into play, including in the field of military and technological cooperation. If we don’t sell weapons to the Saudis, they will go to the Russians and the Chinese, Trump insisted.

U.S. diplomats were also highly suspicious of Russian proposals to create an analogue of the Organization for Security and Cooperation in Europe (OSCE) in the Gulf: an idea Russia renewed in July. Similar proposals made by Moscow in the 1990s and 2000s went unrealized. Now Russia would like to see the United States, China, and the EU involved, as well as the Gulf states themselves. In September, the first expert consultations were held on the issue, at which the main topic of discussion was a mechanism for monitoring activity in the Persian Gulf.

Moscow believes that if such a mechanism were already in place, there would be no questions over who was behind the mysterious attacks on oil tankers in the Gulf of Oman, or the airstrikes carried out against oil facilities in Saudi Arabia. The Americans did not attend the consultations: according to one U.S. diplomat, their position is “what’s the point of a Russian plan? We have our own established system of relations with the Gulf states.” Washington suspects Russia of wanting to squeeze the United States out of the region. But are there any grounds for such fears?

The last four years in the relationship between Russia and Saudi Arabia can be summarized in two words: investment and oil. The Arab countries realize that the time when they could influence world politics through oil prices has long passed. Now they need the OPEC+ union, an alliance of oil producers that includes those that are part of the Organization of the Petroleum Exporting Countries and those that are not, most crucially Russia. It was with this in mind that, in 2016, Moscow and Riyadh began to develop a new level of bilateral cooperation based on the trust formed between the two countries’ leaderships during work on the OPEC+ deal on reducing oil output.

In preparation for Putin’s state visit, a charter on long-term cooperation between OPEC countries and those that are not part of the cartel was drawn up to be signed by Putin and Saudi Arabia’s King Salman.

The second component of Russian-Saudi cooperation is investment. Back in 2015, during the first visit to Russia by Saudi Arabia’s Crown Prince Mohammad bin Salman, the Russian Direct Investment Fund (RDIF) and the Saudi sovereign wealth fund agreed to jointly invest $10 billion in the Russian economy. In 2017, during the first-ever visit by a Saudi king to Moscow, agreements were signed on setting up an Energy Investment Fund and High-Tech Investment Fund worth a billion U.S. dollars each. At the time, these deals seemed like huge successes, but according to the RDIF’s company reports, of the $10 billion promised, so far a total of $2.5 billion has been invested in thirty projects. During Putin’s recent visit to Riyadh, agreements were signed on another ten deals worth $2 billion.

In expert circles, there is a view that investment cooperation is developing very slowly. For traditionally conservative Gulf investors, Russia still looks like a market with not just high returns, but high risks too.

In 2005, the trade turnover between Russia and Saudi Arabia was just $235 million. In 2012, it reached a billion and stayed at that level for two more years before halving when oil prices fell in 2015–2016. The billion mark was only passed again last year. Now the two countries plan to increase turnover to $5 billion by 2024, and reach double figures by 2030, Russia’s Economic Development Minister Maxim Oreshkin said in Riyadh during Putin’s state visit. This doesn’t look particularly impressive compared with the nearly $50 billion turnover between the United States and Saudi Arabia, or the multi-billion turnovers between the kingdom and European and Asian countries, but Russia looks set to catch up with levels achieved by other countries in recent decades.

Trade between Russia and Arab countries is traditionally focused on agricultural produce and arms. In relation to Riyadh, the accent is on agriculture: Saudi Arabia is a major buyer of produce in the region, importing $20 billion a year. Russia is already the main supplier of barley to the kingdom, and at the end of August, it received permission to supply wheat. During Putin’s visit, the two sides signed off on a program to expand Russian food exports to include meat, dairy products, and confectionery. Russia’s Agriculture Minister Dmitry Patrushev believes that it is entirely realistic for Russia to be delivering food exports worth $1–2 billion in just a few years’ time.

The arms situation is more complicated. Saudi Arabia has signed letters of intent on more than one occasion worth billions of dollars, but hardly anything has come of it. In 2017, during King Salman’s visit to Russia, a memorandum was signed by Russia’s state arms exporter Rosoboronexport and a Saudi military-industrial company on buying and localizing production of military equipment, as well as a contract outlining the general terms of setting up licensed production of AK-103 Kalashnikov rifles and various bullets in the kingdom.

According to media reports, the memorandum also covered the local production of TOS-1A Solntsepek multi-barrel rocket launch systems, Kornet-EM anti-tank guided missiles, and AGS-30 automatic grenade launchers. In April, Russia’s Interfax news agency reported that deliveries had begun of the Solntsepek to Saudi Arabia, while in August, the head of Russia’s Federal Service for Military Cooperation, Dmitry Shugaev, confirmed that deliveries of Kalashnikov rifles had begun, though he said localized production was not yet in place.

Russia also regularly recalls that a contract was signed with Saudi Arabia in 2017 for the delivery of Russian S-400 missile systems. In February, it was clarified that Russia and Saudi Arabia were discussing the terms of activating the contract. Yet Riyadh seems keen to avoid this topic, keeping a tactful silence when Putin once again offered the Saudis S-300 and S-400 missiles for protecting their oil facilities. Taking into account the strong defense ties between Washington and Riyadh, no changes are expected in this area, unless the United States suddenly has a dramatic change of heart regarding its relationship with the kingdom.

Considering the prospects for trade, Washington shouldn’t yet be concerned by the growth of Russian influence in the Gulf. It’s obvious, however, that Arab countries are being increasingly proactive in diversifying their connections. Moscow is simply making use of this to gain economic and political advantages. Russia and Saudi Arabia’s differences over Iran are not preventing the two countries from building a pragmatic relationship, while the trust that grew out of cooperation over oil production enabled Moscow to work effectively with Riyadh on resolving the conflict in Syria. After all, without the help of the Saudis, Russia would not have been able to reach an agreement with the Syrian opposition, which is based in Riyadh.