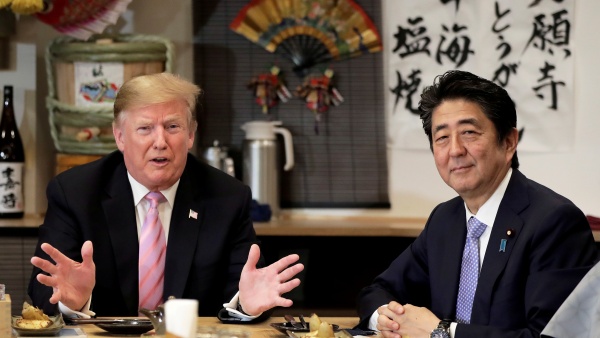 This weekend, Japanese Prime Minister Shinzo Abe welcomes world leaders to Osaka for the annual summit of the Group of 20. This club of major economies has been at the forefront of global governance since November 2008, when U.S. President George W. Bush convened an emergency committee to help rescue a world plummeting into the financial and economic abyss. The G-20’s ambit has since broadened to encompass an ever-expanding range of global issues.

The Osaka summit continues that trend. Japan set an ambitious agenda for its presidency of the G-20, which rotates every year. Major themes include removing structural impediments to growth, reforming the global trading system, adapting the world economy to the data revolution, combating climate change and plastics pollution, adjusting employment policy to reflect aging societies, empowering women in the workforce, advancing sustainable development and achieving universal health coverage. This sprawling program reflects the G-20’s perceived centrality as a global steering group, as well as the constant temptation of successive host nations to add signature initiatives to the G-20’s preexisting priorities.

If experience is any guide, the real action will take place in the bilateral meetings between world leaders and impromptu discussions on pressing global crises, rather than formal sessions. Still, the official themes offer enough of an appetizer:

Bolstering global growth, trade, and investment. The Japanese hope to focus on “structural imbalances” in the global economy, as well as threats to a “rule-based multilateral trading system.” However, they are coy on the nature of these problems, and even more so on how they might be resolved. Pre-summit documents make no mention of U.S. President Donald Trump’s protectionism, unilateralism or ongoing trade war with China. Similarly, Japan has called for strengthening the “momentum” of reform at the World Trade Organization, but are silent on how. This obfuscates differences between those interested in genuine reform, such as Japan, Canada and the European Union, and those using reform as a fig leaf for dismantling the WTO, namely the United States under Trump.

Harnessing technological innovation. Japan has put what is known as the Fourth Industrial Revolution front and center for its G-20 presidency. Speaking at the World Economic Forum in Davos in January, Abe stressed the importance of building public trust in the digital economy—a concept he called “data free flow with trust.” Look for Japanese officials to repeat that theme and stress the importance of “human-centric” artificial intelligence. Japan will also tout its techno-utopian vision of “Society 5.0”—a new, hyper-connected stage of human existence distinct from the four successive types of society that proceeded it, from hunter-gatherer and agrarian to industrial and information.

Combating climate change and pollution. The Japanese government unequivocally supports the Paris Agreement and a global transition to green energy. Critical to these climate objectives are financing for green growth in emerging economies and innovation in the capture, utilization and storage of carbon. Japan will also try to win G-20 commitments to reduce the staggering amounts of plastic litter polluting the oceans, which are even in the depths of the Mariana Trench.

Preparing for the work ahead. Piggybacking on Argentina’s presidency of the G-20 last year, this year’s G-20 summit will discuss changes to “the world of work… driven by globalization, digitalization, demographic transitions,” as well as shifting societal expectations. Fast-graying Japan, whose population is the oldest in the world, is preoccupied with the connections between aging, technology and work.

Empowering women. Successful economies increasingly rely on female capital. The Osaka summit will review the implementation of past G-20 commitments to expand women’s participation in the labor force, notably the “25 by 25” pledge made in 2014 at the G-20 summit in Brisbane, Australia, which seeks a 25 percent reduction in the gender gap by 2025. The G-20 will also endorse an education curriculum for women and girls around science, technology, engineering and mathematics, or STEM, and explore ways to support women business leaders and entrepreneurs.

Accelerating sustainable development. One of the G-20’s strengths lies in its capacity to mobilize its members’ collective economic and political weight to advance the work of more unwieldy bodies like the United Nations. With an eye toward this September’s first-ever U.N. High-Level Political Forum on the Sustainable Development Goals, which were unveiled in 2015, Japan is seeking to strengthen the G-20’s longer-term plans for the so-called 2030 Agenda, with a special focus on infrastructure and human capital investment in developing countries.

Improving global health. Finally, the Osaka summit will feature a joint session of G-20 finance and health ministers, as well as leaders’-level discussions, on three global health priorities: achieving universal health coverage in all nations, promoting “healthy and active aging,” and improving the management of global health emergencies, including those due to rising anti-microbial resistance.

As the only multilateral forum that exclusively convenes leaders from the world’s most important advanced and emerging economies, the G-20 provides unique opportunities to address various global challenges. The most important bilateral meeting in Osaka will be between Donald Trump and Xi Jinping, as the two presidents seek an end to the deepening U.S.-China trade war. The United States is also likely to press for a united front against threats of nuclear proliferation from North Korea and Iran.

The world’s eyes will be on the Trump-Xi meeting, with many investors hoping for a cease-fire in the trade war. In the run-up to Osaka, Trump threatened to impose tariffs on another $300 billion of Chinese exports to the United States if Xi refused to meet with him in Japan. Chinese Foreign Ministry Spokesperson Geng Shuang responded that “China doesn’t want a trade war, but we are not afraid of fighting it.” Trump may be emboldened by his recent deal with Mexico, which he threatened with tariffs if it didn’t agree to crack down on the movement of migrants coming from Central America. But America’s southern neighbor lacks the leverage that China enjoys, making immediate reconciliation with Beijing unlikely.

Trump also plans to meet bilaterally with the leaders of Russia, India and the host nation, among others. Observers will be watching to see if Trump, after his controversial meetings with Vladimir Putin at prior G-20 summits in Hamburg and Buenos Aires—as well as notoriously in Helsinki last year—decides to use a U.S. interpreter or note-taker in his one-on-one session with the Russian president. Trump and Indian Prime Minister Narendra Modi, meanwhile, will no doubt laud their countries’ deepening strategic partnership, including expanding defense cooperation. They will also join Abe in a trilateral meeting meant to reaffirm their shared vision of a “free and open Indo-Pacific,” a strategic concept aimed at containing China’s geopolitical ambitions. At the same time, Modi will be under intense domestic pressure to confront Trump on the tariffs his administration recently imposed on imports from India.

The stakes are highest, of course, for Abe. His fortunes will depend on managing the famously volatile Trump, with whom he has cultivated a relationship more assiduously, and more effectively, than has any other G-20 leader. The two got along typically well during Trump’s state visit to Japan last month, during which Abe repeatedly invoked the “unshakeable” and “rock solid” bond uniting the two nations, soft-pedalled dangers of a bilateral trade war, and gave Trump the opportunity to indulge his sumo wrestling fantasies. But getting Trump to stick to the script in Osaka may prove beyond even Abe’s political talents.