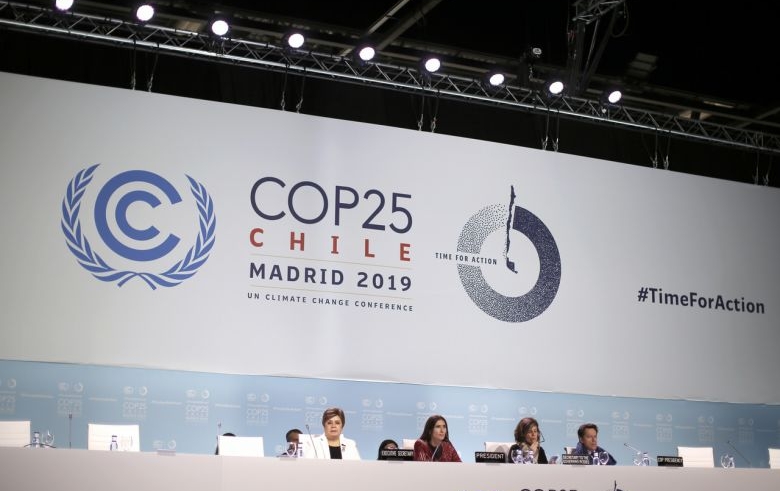 The annual United Nations Climate Change Conference wrapped up Sunday in Madrid, after nearly two weeks of wrangling. Despite a two-day extension that made this the longest round of U.N. climate talks ever, the meeting was a massive failure. Instead of setting more ambitious targets for reducing greenhouse gas emissions, negotiators went home mostly empty-handed, having punted the most difficult climate-related questions to next year’s conference in Glasgow, Scotland.

“The international community lost an important opportunity to show increased ambition on mitigation, adaptation & finance to tackle the climate crisis,” U.N. Secretary-General Antonio Guterres declared in a tweet Sunday. The disappointing result was largely due to the unwillingness of the world’s largest economies to commit to deeper emissions cuts and hammer out a promised international carbon trading scheme.

Meanwhile, warnings from climate scientists are only becoming more dire. According to the latest U.N. assessment, even if countries fulfill their current pledges to reduce emissions, the world is on track to warm by 3 degrees Celsius by the end of the century—a potentially catastrophic result.

The letdown in Madrid was especially palpable in light of the progress made in recent years, particularly the 2015 Paris Agreement on climate change. Widely hailed as the international system’s answer to the climate crisis, it established a framework for countries to submit their own greenhouse gas mitigation plans.

The commitments are not binding and would not currently cut enough emissions to limit global warming to the deal’s target of less than 2 degrees Celsius, and preferably under 1.5 degrees. But the Paris Agreement accounted for these shortcomings with other mechanisms to make the math work, including a fund to finance adaptation and emissions reductions in less-developed countries and a promise that signatories ratchet up the ambition of their climate plans every five years.

Negotiators made incremental progress at subsequent climate conferences despite numerous obstacles, including the Trump administration’s announcement in 2017 that it would withdraw from the Paris Agreement. At last year’s meeting in Poland, for example, parties adopted a crucial “rulebook” that outlines how to uniformly track emissions.

This year, however, negotiators pushing for stronger national climate plans were stymied by the Paris Agreement’s lack of teeth. Its text states that each party’s action plan must be strengthened every five years starting in 2020, but with an exception for countries that craft plans with longer time horizons.

If a country set its goal for emissions reduction through 2030 rather than 2025, it has the option to simply reiterate its previous pledge rather than come up with a more aggressive plan in 2020. As a result, very few countries set 2025 targets, and only 80 countries, representing roughly 10 percent of global emissions, intend to update their plans next year. At this month’s summit in Madrid, key signatories like China and India—the No. 1 and No. 3 global emitters, respectively—pushed back against calls to submit stronger climate plans.

The outcomes of international climate talks will always depend on national politics in the largest greenhouse gas-emitting countries.

The United States, which formally began the year-long process of withdrawing from the Paris Agreement last month, also opposed a range of proposals, from compensating developing countries for loss and damages from extreme weather events to the creation of an international carbon trading market. To be fair, the U.S. is not the only bad actor. Large, wealthy emitters have long been hesitant to make financial contributions to developing countries related to climate change. The Green Climate Fund, which was established in 2010 and aims to assist less-developed countries in their mitigation and adaption efforts, remains underfunded, partly because of the Trump administration’s refusal to contribute to it.

The carbon trading scheme was a major point of contention in Madrid because it remains the largest unresolved article in the Paris Agreement. It would essentially even out the costs of global warming by setting an overall cap on emissions and allowing countries with lower emissions to sell credits to large countries that exceed their allowance. But a number of countries proposed loopholes that would weaken it.

Australia argued that countries should be able to carry over credits earned from the Kyoto Protocol, the Paris Agreement’s weaker predecessor. Brazil maintains it should be allowed to double-count its forests toward the trading scheme, so that it can sell credits for keeping forests intact, and as carbon sinks toward its national emissions cuts. Unable to reach a compromise, negotiators shelved the issue until Glasgow.

While the conference as a whole was a failure, there were some promising developments. The threat that the climate crisis poses to oceans received a nod, as nearly 40 countries committed to including oceans in their next climate plans.

Urgency about climate change continued to grow among corporations, as 177 firms, collectively representing the combined CO2 emissions of France, strengthened their pledges, vowing to cut emissions in line with the 1.5-degree target. And the European Union unveiled the European Green Deal, an ambitious package of policy proposals, including a carbon border tax and new investments in carbon capture innovation, that aims to zero out EU emissions by 2050 and could induce other countries to follow suit.

But even those few bright spots could not mask an overall sense of disappointment in Madrid. If the failed round of talks showed anything, it is that the success of climate negotiations depends on factors well outside of the U.N. process.

The Madrid summit, after all, was arguably doomed before negotiators even landed in Spain. In recent years, Australia, Brazil and the U.S. all elected leaders who have avoided or openly dismissed action on climate change. Even with increased commitments from regional and local governments and the private sector, the outcomes of climate meetings will always depend on national politics in the largest greenhouse gas-emitting countries.

One year is not a lot of time to shift national politics around climate action, but the success of next year’s Glasgow summit will depend on it. In the U.S., that shift seems possible given that frontrunners in the Democratic presidential primary have put forward climate action proposals that go far beyond what American negotiators blocked in Madrid.

Given the glaring lack of U.S. participation in the Green Climate Fund, the ability of many developing countries to adequately mitigate their emissions has less to do with their own national policies and more with whether American voters give President Donald Trump a second term.

China’s domestic politics will similarly affect subsequent climate talks. Beijing appears to be back to building coal plants amid slower economic growth after years of freezing new coal projects, and Communist Party leaders are reportedly mulling a recalibration of the country’s oft-touted shift to renewable energy. How that debate shakes out will certainly affect China’s negotiating stance in future rounds of climate talks.

The Madrid summit highlighted the wide gap remaining between developed and less-developed countries when it comes to global climate action, but the Paris Agreement proved the differences are surmountable with the right leverage and incentives.

To rebuild the spirit of Paris and make the next climate conference a success, policymakers and activists in major emitting countries will first need to move the political needle at home.