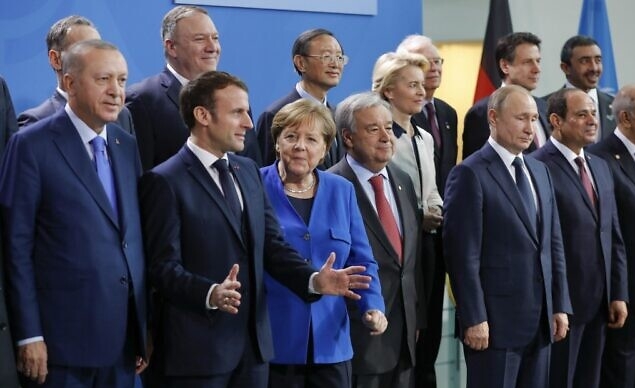 The efforts to end the war in Libya is a test of German leadership. It might even be the beginning of a new role for Germany, which can no longer afford to let others do the diplomacy and the fighting.

On January 19, the German chancellor hosted world leaders in Berlin to try and forge a ceasefire in Libya. It was a highly risky decision. And a symbolic one. Back in 2011, Germany abstained from a UN mandate to intervene in Libya.

Still, their presence in Berlin (preceded by unsuccessful attempts in Moscow by Russia and Turkey to make some progress) was coupled with an agreement reached by world leaders—including some of those involved in Libya on each side of the conflict—to respect an arms embargo. It showed Merkel’s determination to try and end this war.

It could be Merkel’s legacy.

Nine years ago, Germany’s reputation among its Western allies was almost in shatters. It had just won a two-year stint on the UN Security Council. When a vote was called to intervene in Libya under the Responsibility to Protect (R2P) mandate, the Merkel government abstained. Its closest allies—France, Britain, and the United States—were flabbergasted, particularly since Berlin was accused of siding with Russia.

Back home, there was any amount of hand-wringing over Berlin’s decision. And when it soon after refused to join the NATO coalition that attacked Libya (changing the mandate from R2P to regime change was, by the way, not lost on Russia), Germany was considered an unreliable ally.

As it turned out, Germany’s decision was the right one—even though Merkel communicated it so badly.

She had seen how the U.S.-led military coalition in Iraq had ended in abysmal failure. There was no planning for the day once Saddam Hussein’s regime was toppled. The same was true for Libya. When Colonel Gaddafi was ousted, neither NATO nor the UN had a plan for the day after.

France and Germany were to pay a very high price for the war in Libya.

Soldiers and mercenary armies who had operated in Libya quickly left, moving, with their weapons, to Mali and other places in the Sahel. Since then, France, the former colonial power, has been fighting a war—with support from the United States—to contain Islamic terrorism, trafficking, and growing instability. Just look at the number of casualties all round.

Germany hasn’t been spared either.

With the war, plus the instability in the neighborhood, Libya has become one of the main routes for migrants and refugees wishing to cross the Mediterranean to Europe. Smugglers and traffickers have had a field day. EU efforts to stem the flow by deploying Operation Sophia have been mixed, to say the least. Above all, Merkel’s foreign and domestic policies have become synonymous with migration.

In 2015, with the war in Syria leading to unspeakable suffering for civilians, Merkel opened the borders to over one million people fleeing the war. She inherited NATO’s failed policies in Libya, America’s failed policies in Iraq, and the West’s ignominious diplomatic and political failure in Syria.

The blame game is as wide and deep as the violence and destruction in Libya, Iraq, Syria, and also Yemen—that forgotten war. And since Germany was not playing any consequential diplomatic or political role in the region, Merkel, for ethical and humanitarian reasons, decided to give so many people much-needed refuge.

Depending on how her decision is viewed, the chancellor has paid a high price for it.

The Alternative for Germany, an anti-immigration, anti-Muslim, and anti-Semitic party, is hugely popular in parts of Germany, particularly in the Eastern states. There, it is jockeying for first and second place among the political parties. The lurch to the far-right cannot be dismissed as a short-term phenomenon or blip.

Just as Merkel’s decision to abstain in the UN vote over Libya in 2011 earned her the wrath of her allies, her refugee policy changed Germany’s political status quo.

But by hosting world leaders in Berlin on Sunday, January 19, the chancellor was seeking amends on two fronts, both related: the diplomatic one and the refugee one.

Germany has come in for a lot of flak for being a passive foreign policy player—even though Merkel should be given credit for negotiating a ceasefire, however fragile, in eastern Ukraine in 2015. Yet precisely because it abstained during the Libya vote in 2011, Germany could be seen as neutral in hosting the Libya conference.

But there’s a heavy dose of realpolitik involved. Merkel knows the refugee crisis is far from over and that Libya is still a major route to Europe. She knows too, after several visits to the region and many discussions with French President Emmanuel Macron, the combustibility of the Sahel and how it poses immense security threats to the wider region and to Europe. The greater the insecurity in the Sahel, the greater the flows of refugees and migrants.

As Merkel enters her two last years as chancellor, her legacy may just hinge on ending the war in Libya. Whatever the outcome, it’s about Merkel making Germany look at foreign policy as an actor, not a recipient.