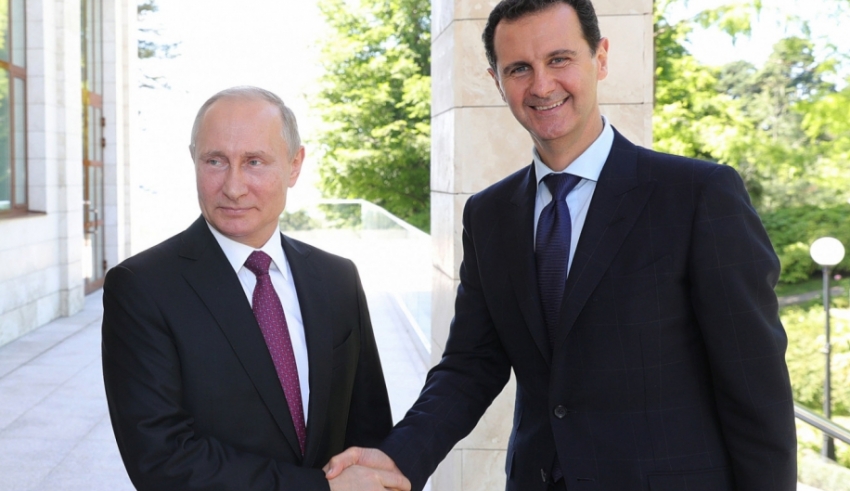 The assassination of Iran’s top military commander, Maj. Gen. Qassem Soleimani, raises a lot of questions about what an all-out war between the United States and Iran might look like. The simple answer is that it will be bad, but how bad may depend as much on Russia as it does on the U.S. and Iran.

If there is one player in the dangerous drama unfolding in the Middle East with the ability to flip the script, it’s Russian President Vladimir Putin. Five years ago, Trump’s predecessor, Barack Obama, dismissed Russia as a “regional power” capable at most of menacing weaker neighbors like Ukraine.

Today, Putin appears to be making a convincing case that when it comes to influencing security in the Middle East, Russia, not the U.S., is now the indispensable nation.

Putin’s visit to Syria was his second since Russia deployed troops there in 2015 to prop up Assad at the height of the Syrian civil war.

Putin’s well-timed visit to Damascus illustrated just how much the ground has shifted in the Middle East on Trump’s watch. It seemed designed to underscore the Kremlin’s message that in Syria today, Russia is the heavyweight, not Iran—a message directed as much at Washington and Brussels as it is to Tehran.

Putin’s shuttle diplomacy provided a sharp contrast to Trump, who spent the first few days after the drone attack ducking Congress, dodging the press and delivering rambling, pseudo-national security briefs by tweet, along with multiple threats to target cultural sites in Iran if the conflict escalated further, which would be a war crime.

That contrast will be all the more apparent this weekend, when Putin is scheduled to meet with German Chancellor Angela Merkel to discuss the tensions that brought the U.S. and Iran to the brink of war, as well as other “current international questions,” according to Merkel’s spokesman, from Syria to Ukraine. Given the current hostilities and Trump’s vow to impose even stiffer sanctions on Iran, how to salvage the Iran nuclear deal, which Russia and Germany are part of—and whether it is even possible—is sure to be a top item on Putin and Merkel’s agenda in Berlin.

Perhaps more important for Putin, the meeting with Merkel may also provide an important opportunity to probe for more vulnerabilities in the soft underbelly of the NATO alliance. While Iran and the U.S. appeared to have pulled back from open war, Europe, perhaps in vain, is still trying to find an elusive diplomatic solution to ease tensions and save the nuclear deal. That leaves Russia with plenty of room to maneuver between the U.S. and its traditional European allies and try and exploit the situation to its advantage.

For now, there can be little doubt that when it comes to Iran, America’s losses are Russia’s gains.

Trump’s request to NATO to “become much more involved in the Middle East” during an address at the White House a day after Iran’s missile strike could hardly have been more obtuse. It is unclear if Trump has either forgotten all the abuse he’s heaped on NATO since taking office, doesn’t think it matters, or just doesn’t understand how calling on NATO—a trans-Atlantic alliance designed to counter Russian aggression—to get more involved in the Middle East might, under current circumstances, be more of an irritant to America’s allies than a balm. If the past three years of Trump’s approach to relations with NATO and Russia are any guide, it’s probably a case of all the above.

For now, there can be little doubt that when it comes to Iran, America’s losses are Russia’s gains. As long-time Russia hand Strobe Talbott and his colleague Maggie Tennis noted this week, Trump’s failure to reach out to European allies in advance of the strike on Soleimani bolsters Putin’s ability to promote his favorite line that the U.S. is an erratic partner at best and a menace to global stability at worst.

At the same time, Putin’s ability to sway the key players in Europe—Germany, France and Britain—to see things his way is relatively limited by other geopolitical tensions: the war in Ukraine, which remains unresolved, and the ongoing civil war in Syria, where issues of reconstruction and reconciliation are frozen.

With the 2020 U.S. presidential election looming, Russia also faces serious constraints when it comes to convincing Trump to abandon his “maximum pressure” campaign against Iran in favor of resurrecting the nuclear deal. If there is one thing Trump is most likely to crow about the loudest on the campaign trail, it’s the assassination of Soleimani—essentially the No. 2 figure in the Iranian regime, who was the main champion of Hezbollah in Lebanon and the architect of multiple attacks on American interests across the Middle East.

The proxy forces that Soleimani built up have served as Tehran’s strategic bulwark, stepping into power vacuums from Lebanon to Iraq. While Iran has repeatedly demonstrated that it holds strong sway over many irregular militias—Hezbollah in Lebanon, the Houthis in Yemen, the Popular Mobilization Forces in Iraq and groups in Syria like Liwa Fatemiyoun, an Afghan Shiite militia—there’s no predicting how the latest step up the escalation ladder will influence the strategic calculations of these proxies.

As the war in Syria has shown, Russia has exactly zero appetite to confront and no ability to constrain Iran’s proxies, which are Tehran’s preferred way of projecting influence. Beyond this week’s Iranian missile strike, which was the first direct Iranian attack on U.S. forces in years, or last summer’s hit-and-run operations against commercial ships in the Persian Gulf likely carried out by the Islamic Revolutionary Guard Corps, it is Iranian-backed proxies that pose the greatest risk to stability in the region.

Although Russia may benefit economically if security deteriorates in the Gulf, with a spike in oil prices providing a much-needed windfall to the Russian energy industry, such instability also poses other risks to Moscow.

Putin may relish appearing indispensable in the Middle East amid a U.S.-Iran standoff, but if anything can jolt Washington and Brussels to unified action on Iran, it’s a threat to energy and trade flows in the Gulf and Eastern Mediterranean. With new, harsher U.S. sanctions now in the mix, the U.S. and its NATO partners have few good options outside of a military response in the event of an escalation that choked off vital shipping routes in the Gulf, leaving Russia even less room to maneuver at that scenario.