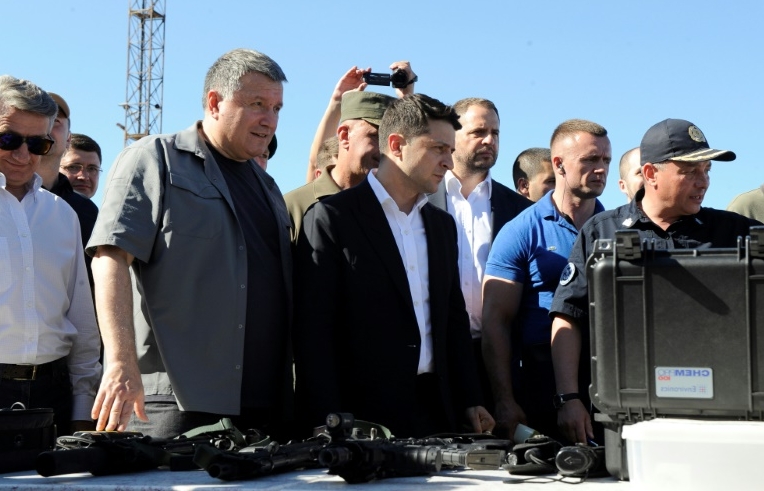 Arsen Avakov has survived Ukraine’s change of regime. President Zelensky needs him because of his links to the dark side of the Ukrainian deep state, against which the president’s young reformers are often powerless. The omnipotent minister is prepared to put aside his personal ambition to become the regime’s informal mainstay.

The Ukrainian government has been in power for just six months, but is already in crisis. Prime Minister Oleksiy Honcharuk was nearly forced to resign after a recording was leaked of him apparently criticizing President Volodymyr Zelensky; the young reformers are being harshly criticized in parliament and in the media; and there are rumors that some ministers could soon be fired for not meeting their Key Performance Indicators.

The sole island of stability amid this storm is Interior Minister Arsen Avakov, a figure left over from the previous government, whose reappointment was highly controversial at the time. Back then, Zelensky responded to that criticism by promising that Avakov would only be kept on temporarily. But the six months allotted to the unpopular minister are already up, and his position has only grown stronger. Already the longest-serving figure in authority, he is gradually gaining a new status: that of the main guarantor of stability.

Avakov, then a parliamentary deputy for the Fatherland party, was appointed Interior Minister back at the start of 2014, at the height of the reshuffles that followed Ukraine’s Maidan revolution. At the time, no one imagined that he would keep the job for so long. After all, not long before his appointment, Avakov had been forced to live in exile in Europe to escape criminal charges initiated by then president Viktor Yanukovych.

As head of the Interior Ministry, Avakov has transformed an infamous ministry into his personal political project. He managed to bring onside the nationalists, who had become an influential force following the Maidan revolution, giving rise to a National Guard that is loyal to Avakov.

The minister has also managed to carry out a series of major reforms, creating a new police force and purging the ranks of corrupt officers. He actively uses social media to communicate with the public, and was one of the first to do so.

There is no doubt that Avakov has also employed more traditional methods to cement his authority, including using his office to collect damaging information about (it is rumored) everyone else in a position of power.

Under former president Petro Poroshenko, Avakov became seen as a guarantor that political turmoil would not threaten law and order and translate into chaos on the streets. This was precisely why he was kept on by the new authorities—albeit on a temporary basis.

Avakov wasted no time establishing contacts within the new president’s inner circle, and swiftly became one of the most influential figures on issues of security and even foreign policy. He also has his supporters in parliament, and has successfully worked together with Ihor Kolomoisky, the oligarch closest to the new regime.

Avakov’s influence continues to grow. Now, as the government prepares to tackle the unpopular move of lifting the moratorium on selling agricultural land, and the specter of more street protests looms, the role of the Interior Minister as a guarantor of political stability is gaining strength.

As head of the ministry, Avakov already controls the police and National Guard, the border guards, immigration services, and emergency services. Now he plans to increase his powers: a bill has already been submitted to parliament that would see the creation of a military intelligence unit for the National Guard, with a secret budget and authority to conduct special operations abroad.

Currently, Avakov is focused on two presidential orders: fighting illegal gambling, and investigating the murder of the journalist Pavel Sheremet, who was killed by a car bomb in Kiev in 2016. The stakes for the minister are high: one parliamentarian has already said that if the case falls apart (the media have reported numerous inconsistencies in the case materials), it could cost Avakov his job.

Avakov faced another challenge recently when he featured in U.S. President Donald Trump’s impeachment proceedings. The businessman Lev Parnas, while working for Trump’s lawyer Rudy Giuliani, twice asked Avakov for help in organizing a visit by Giuliani with the aim of digging up dirt on the family of rival U.S. politician Joe Biden. Avakov gave evasive replies on both occasions, before ending the communication.

Avakov’s image in the West has also been tarnished by his patronage of the far-right Azov battalion, a volunteer militia that formed during the Ukraine conflict and was later incorporated into the National Guard. A group of U.S. congressmen called for Azov to be declared a terrorist organization following the exposure of links between far-right Ukrainians and their counterparts in the West.

Despite his critics’ best efforts, Avakov’s position remains strong, with one Ukrainian lawmaker betting money on the fact that the minister will be appointed prime minister. Avakov, however, likely prefers his current post, which gives him broad official opportunities, and even more unofficial ones.

In addition, Avakov is unpopular with the public, 69 percent of whom do not trust him, according to a poll by the Razumkov center, which would make it difficult for him to carve out his own political career.

What really matters, however, is that Avakov has the trust of the president, who feels increasingly isolated amid the divisions in his team. Zelensky needs Avakov as someone with ties to the dark side of the Ukrainian deep state, against which the young reformers are often powerless. The omnipotent minister, for his part, is prepared to put aside his personal ambition to become an informal mainstay of power—at least as long as the president himself retains his popularity and the people’s trust.