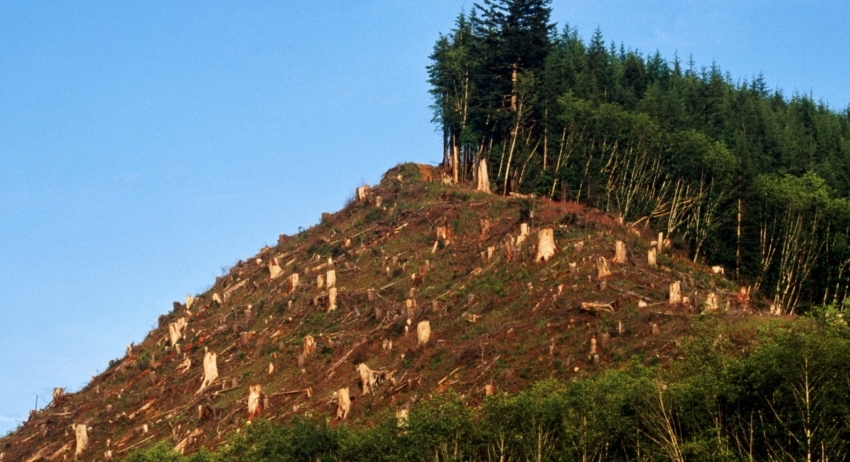 Forests cover about 30 percent of the planet’s land mass, but humans are cutting them down, clearing these essential habitats on a massive scale. Forests are one of the most powerful tools we have to combat climate change and provide food and habitat for the species of the world. But our forests are under threat!

Our planet is currently losing forests at a staggering rate: We’re losing more than 18 million acres of forests every year — that’s about 27 soccer fields of forest lost every minute.

As the world seeks to slow the pace of climate change, preserve wildlife, and support billions of people, trees inevitably hold a major part of the answer. Yet the mass destruction of trees—deforestation—continues, sacrificing the long-term benefits of standing trees for short-term gain.

Forests still cover about 30 percent of the world’s land area, but they are disappearing at an alarming rate. Between 1990 and 2016, the world lost 502,000 square miles (1.3 million square kilometers) of forest, according to the World Bank—an area larger than South Africa.

Since humans started cutting down forests, 46 percent of trees have been felled, according to a 2015 study in the journal Nature.

About 17 percent of the Amazonian rainforest has been destroyed over the past 50 years, and losses recently have been on the rise.

We need trees for a variety of reasons, not least of which is that they absorb not only the carbon dioxide that we exhale, but also the heat-trapping greenhouse gases that human activities emit. As those gases enter the atmosphere, global warming increases, a trend scientists now prefer to call climate change. Tropical tree cover alone can provide 23 percent of the climate mitigation needed over the next decade to meet goals set in the Paris Agreement in 2015, according to one estimate.

Farming, grazing of livestock, mining, and drilling combined account for more than half of all deforestation. Forestry practices, wildfires and, in small part, urbanization account for the rest. In Malaysia and Indonesia, forests are cut down to make way for producing palm oil, which can be found in everything from shampoo to saltines. In the Amazon, cattle ranching and farms—particularly soy plantations—are key culprits.

Logging operations, which provide the world’s wood and paper products, also fell countless trees each year. Loggers, some of them acting illegally, also build roads to access more and more remote forests—which leads to further deforestation. Forests are also cut as a result of growing urban sprawl as land is developed for homes.

Not all deforestation is intentional. Some is caused by a combination of human and natural factors like wildfires and overgrazing, which may prevent the growth of young trees.

Why it matters and what can be done

Deforestation affects the people and animals where trees are cut, as well as the wider world. Some 250 million people living in forest and savannah areas depend on them for subsistence and income—many of them among the world’s rural poor. Eighty percent of Earth’s land animals and plants live in forests, and deforestation threatens species including the orangutan, Sumatran tiger, and many species of birds. Removing trees deprives the forest of portions of its canopy, which blocks the sun’s rays during the day and retains heat at night. That disruption leads to more extreme temperature swings that can be harmful to plants and animals.

Yet the effects of deforestation reach much farther. The South American rainforest, for example, influences regional and perhaps even global water cycles, and it’s key to the water supply in Brazilian cities and neighboring countries. The Amazon actually helps furnish water to some of the soy farmers and beef ranchers who are clearing the forest. The loss of clean water and biodiversity from all forests could have many other effects we can’t foresee, touching even your morning cup of coffee.

In terms of climate change, cutting trees both adds carbon dioxide to the air and removes the ability to absorb existing carbon dioxide. If tropical deforestation were a country, according to the World Resources Institute, it would rank third in carbon dioxide-equivalent emissions, behind China and the U.S.

The numbers are grim, but many conservationists see reasons for hope. A movement is under way to preserve existing forest ecosystems and restore lost tree cover. Organizations and activists are working to fight illegal mining and logging—National Geographic Explorer Topher White, for example, has come up with a way to use recycled cell phones to monitor for chainsaws. In Tanzania, the residents of Kokota have planted more than 2 million trees on their small island over a decade, aiming to repair previous damage. And in Brazil, conservationists are rallying in the face of ominous signals that the government may roll back forest protections.

For consumers, it makes sense to examine the products and meats you buy, looking for sustainably produced sources when you can. Nonprofit groups such as the Forest Stewardship Council and the Rainforest Alliance certify products they consider sustainable, while the World Wildlife Fund has a palm oil scorecard for consumer brands.