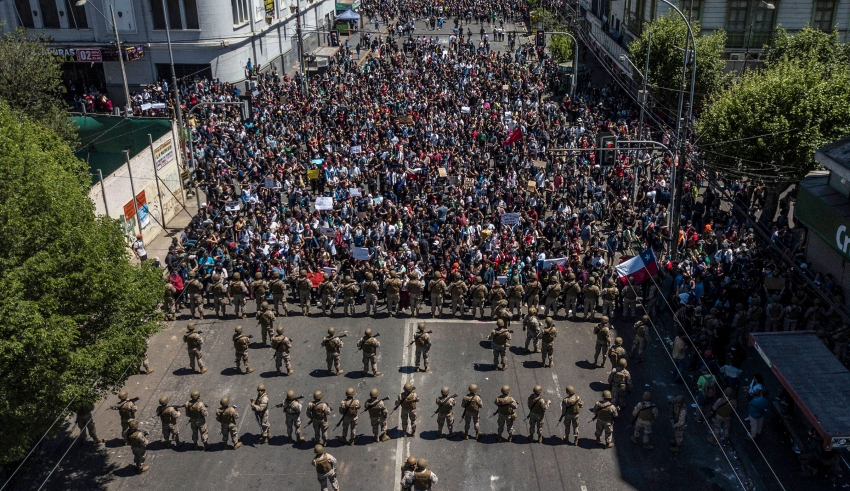 Aerial view of demonstrators during the seventh straight day of protests against a now suspended hike in metro ticket prices in Valparaiso Chile, on October 24, 2019

Until just a few days ago, Chile probably looked to most people like the most stable country in Latin America, and the least likely to erupt in massive social unrest. Few if any countries in the region have experienced decades of economic growth and an expansion of the middle class, alongside reliably fair and competitive elections.

Last week, the streets of Santiago became the scene of violent clashes between thousands of protesters and security forces, leaving more than a dozen people dead and hundreds arrested. In response, President Sebastian Pinera deployed the military, imposed curfews and announced a state of emergency, declaring, “We are at war.”

The sudden, ferocious eruption of discontent caught just about everyone at home and abroad by surprise. If it can happen there, some observers noted, it can happen anywhere.

It all started after the government announced an increase in subway fares, raising prices by about 4 percent. The fare hike sparked a student protest calling on riders to stop paying. That call gradually caught on, leading to fare-jumping mobs and, by the end of last week, largely peaceful protests had given way to full-blown riots. Protesters barricaded entrances to subway stations and set many of them on fire. They threw rocks at police, torched buses and cars, and set the high-rise headquarters of national energy company Enel Chile in downtown Santiago ablaze. The police first responded with water cannons before Pinera, who then revoked the fare hike, handed security responsibility to the military.

On the fifth day of protests, Pinera, a wealthy businessman now serving his second nonconsecutive term as president, changed tack. He offered a series of reforms: increasing pensions, freezing electricity rates and expanding health care benefits in hopes of restoring calm. But protesters weren’t satisfied, and the country is now bracing for a general strike.

It is the worst bout of unrest in Chile since the end of the Pinochet dictatorship four decades ago. How did it come to this, in arguably the most successful economy and democracy in all of Latin America?

While some Pinera supporters baselessly charged that the mayhem was a plot by extreme leftists who are sympathetic to Cuba and Venezuela and eager to sabotage Pinera’s rightist government, most economists and international observers agree that, although Chile’s economy has performed remarkably well, the extreme level of inequality explains the depth of discontent. But even that economic explanation fails to fully account for what has occurred.

Chile’s economy is certainly a model of economic growth. Decades ago, its GDP per capita was similar to that of its neighbors; now it is one of the highest in the hemisphere. In a region where GDP growth can often fortify the rich and leave the poor behind, Chile’s economic policies, through both center-right and center-left administrations, have slashed the poverty rate from 40 percent in 1990 to less than 10 percent now, boosting the ranks of the middle class.

For all its prosperity and decline in poverty, though, Chile indeed suffers from severe inequality, as does just about all of Latin America. The Organization for Economic Cooperation and Development says Chile is one of its most unequal member countries, and that the top 10 percent of Chilean earners make 26.5 times the average income. But inequality, according to one recent World Bank estimate, is worse in Brazil, Colombia, Panama, Honduras and Guatemala.

The sense of economic unfairness in Chile is sharply pronounced, exacerbated by a wealthy president with a tin ear.

Could corruption instead be the real fuel of this popular uprising? But even on that count, Chile ranks among the least corrupt countries in the Americas, according to Transparency International’s index of perceived corruption in the public sector.

If poverty, inequality and corruption are hardly the worst in the region, the sense of economic unfairness in Chile is still sharply pronounced, exacerbated by a wealthy president with a tin ear. Pinera was dining at a posh Santiago restaurant last Friday night while the city burned.

That sense of an entitled upper class lacking empathy for those who struggle is all too common across Latin America. It sparked riots in Chile, it seems, because of economic modernization theory. As incomes rise, so do economic expectations, and with them the potential for political instability if those expectations aren’t met.

That’s not even the full story, though. Chile is not alone. Violent protests have engulfed other Latin American countries. The recent crisis in nearby Ecuador triggered by austerity measures became so severe that the government relocated out of the capital, Quito, to the port city of Guayaquil. Unrest has also erupted in Nicaragua and Bolivia, leading some to suggest this could be the opening stages of a “Latin American spring.”

These trends aren’t confined to the region. Look at Lebanon, where mass protests that began last week, initially over a new mobile phone tax on the use of WhatsApp, are still pressing for changes from entrenched ruling elites over a range of simmering economic and political grievances. Or consider Iraq, where huge anticorruption protests were met with brutal, deadly force. Or France, where the “Yellow Vests” convulsed the country for months last year.

In an age where the public has developed a low tolerance for political and economic frustration, there is no longer meek acceptance of inequality and unfairness as unavoidable. Instead, there are demands for responsive, empathetic and competent leadership.

Countries that are overly dependent on single export commodities are particularly vulnerable to unrest if market downturns hurt living standards. Austerity measures, even modest ones, could be the detonators for explosions of popular discontent, especially if they touch on daily living expenses like food, fuel or public transportation. Demagogues could move masses, but masses can also be mobilized on their own.

No country, not even one with solid governance and strong economic growth, can take political stability for granted anymore. If it can happen in Chile, it can, indeed, happen anywhere.