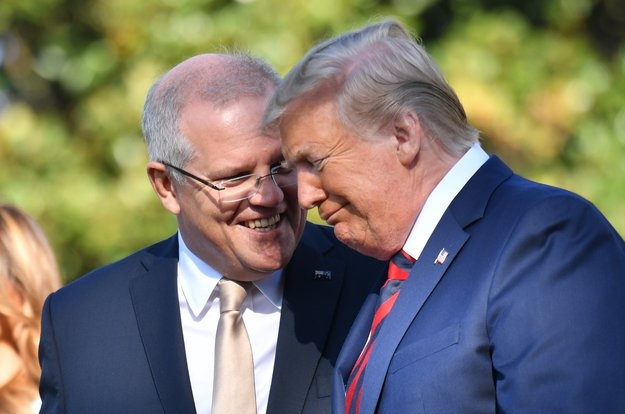 While Australia wants Europe to take a tougher line on China, joining a liberal-democratic front to counter Beijing’s increasing assertiveness and bullying comes with great risks.

On June 22, 2020, European Union leaders did something Australia’s political leaders are unable to do. They talked to their Chinese counterparts.

Any direct contact between Australian and Chinese leaders seems to be unlikely for the foreseeable future after a sudden chilling in diplomatic relations over what China sees as Australia becoming a mouthpiece for U.S. President Donald Trump.

Over the past year, Canberra has chosen to strengthen its political and diplomatic ties with Washington in an unannounced but obvious belief that its vital strategic relationship with the United States obliges it to take the U.S. side in the increasingly troubled relationship with China.

While the EU and major European powers continue to seek a middle road in relations between the quarreling superpowers, Australia has decided to risk Chinese anger and potential punishment to support the U.S. assertion of Western liberal-democratic values over China’s communist ideology.

In fact, Australia is actively advocating for the entire Western community—including Europe—to assert these values more robustly. Although it is not openly critical of the European attempts to steer a middle course, Australian politicians are increasingly concerned that Europe risks jeopardizing the prospects of a united liberal-democratic front facing up to China’s increasing assertiveness and bullying.

An indication of these changing strategic currents came when Trump announced his intention to expand the next G7 summit to include four other powers: Australia, India, Russia, and South Korea.

While European leaders balked, conservative Australian Prime Minister Scott Morrison jumped at the chance to attend, despite warnings that Trump intended to use the expanded meeting to form a united front against China.

Donald Trump-created Washington “pile-on” against Beijing—if Australia was to play a prominent role—would indeed be a high-risk event for Morrison and for Australia’s national interests. But an important threshold appears to have been crossed in May when Australia decided not only to back U.S. demands for an inquiry into the Chinese origins of the new coronavirus but to be the first country to formally propose such an inquiry at the World Health Assembly in Geneva.

China reacted with fury, with Chinese officials using language to condemn Australia that was unprecedented in its bluntness.

The EU came to Australia’s rescue in Geneva, drafting a softer proposal for an investigation which both Australia and China accepted. But China has since taken a series of what are clearly retaliatory actions, including imposing swinging tariffs on barley imports from Australia, sanctioning Australian companies exporting meat to China, and warning Chinese citizens—tourists and students—to reconsider traveling to Australia because of heightened risks of racist attacks.

Although he did not name China, Morrison warned on June 19 that Australia was the target of a wide-ranging cyber attack and that the attack was “state-based.” Beijing responded that this was a smear aimed at China.

There are increasingly loud calls from conservative politicians and commentators for Australia to immediately begin disengaging from China.

A cross-party group of Australian members of Parliament (MPs) that has named itself the Wolverines is agitating for a tougher line against China. Australian MPs have also joined an international group of China critics, the Inter-Parliamentary Alliance on China, which includes members of the British and European parliaments.

The aim of both groups is to build a liberal-democratic front against China. Their members condemn what they see as Western appeasement of China and want the EU to give stronger backing to Washington’s harder line against China. Polling of Australian attitudes by the Lowy Institute shows three quarters of those polled believe that Australia has become too dependent on China and that China will ultimately seek “regional domination.”

The Australian government insists that relations with China are solid, although it has surprised security analysts by proposing a “commercial role” for the Five Eyes intelligence-sharing alliance, a move Morrison says is necessary to “build trusted supply chains”—surely intended as an alternative to China.

Australia has been looking to diversify its economic relationships, including with the EU, which is its second-biggest trading partner after China. Negotiations for an Australia-EU Free Trade Agreement commenced two years ago but have made slow progress.

But trade with China dwarfs trade with any other partner, with more than a quarter of all Australian exports going to China. Australia’s exports are predominantly natural resources—iron ore, coal, and natural gas—which have fed China’s extraordinary growth rates. There are no equivalent potential buyers. Education and tourism, Australia’s main and economically vital services exports, are also dominated by China.

Australia cannot decouple from China without inflicting serious self-harm. “China is not going away. It is getting stronger and we need to engage with it sensibly,” warns Dennis Richardson, a former Australian ambassador to Washington. But, for the moment at least, voices of moderation are being drowned out by alarmists and partisans, potentially threatening further trouble.