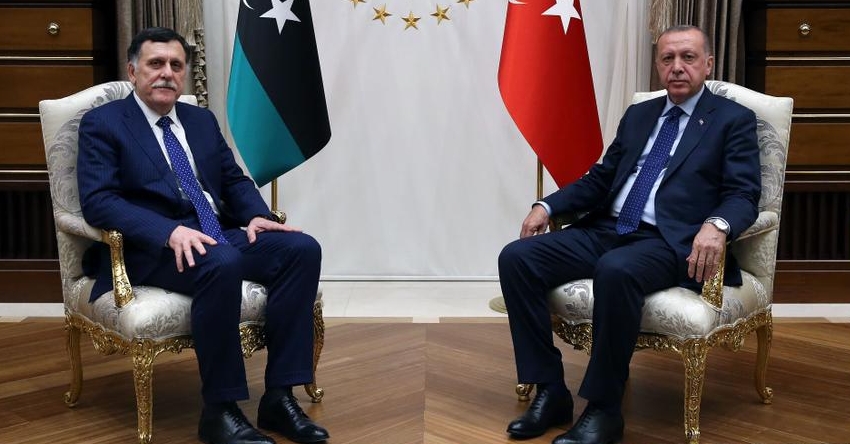 “We will be protecting the rights of Libya and Turkey in the Eastern Mediterranean,” Erdogan told Turkish television. “We are more than ready to give whatever support necessary to Libya.”

The bilateral deal, which provides for a quick reaction force if requested by Tripoli, was sent to parliament on Saturday but it is unclear when a vote will take place.

Ankara’s latest move comes as the Libyan war enters a crucial stage, with eastern Libyan commander Khalifa Haftar launching what he said would be a “final battle” for Tripoli.

His offensive against the UN-recognised government began in April but has so far stalled outside the capital.

Euronews explores the reasons behind Turkey’s military pledge to Tripoli and its possible consequences on the regional and international stage, at a time of rising tensions between Ankara and its European allies.

What’s Turkey’s interest in getting involved?

Turkey has said the military pledge to Libya was primarily motivated by legality.

Haftar “is not a legitimate leader…and is representative of an illegal structure,” Erdogan said after meeting in Istanbul with Fayez al-Sarraj, prime minister of Libya’s Government of National Accord.

But Turkey’s interest in Libya is not new, expert Barah Mikail, director of Strategic Consulting and Associate Professor at Saint Louis University in Madrid told Euronews.

“Ankara has sought to develop a policy of influence in the aftermath of the fall of Libya’s former ruler Moammar Gaddafi,” in 2011 Mikail said.

“But with Commander Khalifa Haftar’s offensive against Tripoli in April 2019, the Turks found new ways to expand their political and military influence on the ground.”

According to the expert, Turkey’s strategic interest is to develop a Mediterranean policy that may compete with that of the Europeans.

Economic calculations are another factor with Libya offering “huge prospects” in terms of infrastructure development and reconstruction. Turkey may furthermore want to display its military capabilities by selling weapons to the so-called Government of National Accord (GNA) based in Tripoli.

“There could also be an ideological component to explore, given that Fayez Sarraj’s government has the reputation to be subjected – even if it is less than before – to the influence of Islamists, in a context in which the Islamist orientations and beliefs of Turkish President Erdogan are all but secret,” the Barah Mikail  told Euronews,

“But I doubt that this component prevails over the geopolitical aspects,” he added.

How likely is a Turkish intervention?

According to the text of the military agreement sent to Turkish lawmakers, Tripoli could request vehicles, equipment, and weapons for use in army, navy and air operations. It also provisions for new intelligence sharing.

Even before this agreement, there was ongoing military cooperation between Tripoli and Ankara. Last week, the UN Security Council found that Turkey, along with Jordan and the UAE, was among the governments violating the weapons embargo in Libya by arming warring sides.

As noted by expert Barah Mikail, President Erdogan has so far emphasized Turkey’s readiness to put military means at Sarraj’s disposal — rather than sending straight troops on the ground.

“Obviously we can’t rule out anything but I would take what the Turks are saying about their will to send troops to Libya with a pinch of salt,” the analyst said

“The Turks say that the simple fact for Tripoli to officially request such an intervention would make it happen. I dare to believe that Fayez Sarraj and his entourage will not only have to take into account the reluctance of their European counterparts on the issue but also calculate the risks of such an intervention before deciding to call it.”

“And the risks associated with such an intervention are considerable,” Mikail added.

Even within Turkey, there is far from consensus behind sending troops to Libya.

Utku Cakirozer, a lawmaker from Turkey’s main opposition CHP and a member of the NATO parliamentary assembly told Reuters: “Turkey should not enter into a new adventure.”

“The AKP government should immediately stop being a party to the war in Libya.”

How would it affect regional stability?

“A Turkish intervention in Libya would only increase the current destabilization and raise the risks that other foreign armed troops may imitate the Turkish move,” Mikail said.

“We have the ability to (intervene in Libya) but we haven’t,” Egyptian President Abdel Fattah al-Sisi told a youth forum in the Red Sea resort of Sharm El-Sheikh.

Egypt is a regional rival of Turkey and one of the main backers of the LNA, which is battling forces aligned with the internationally recognized government in Tripoli.

In the past, Egypt has carried out airstrikes in Libya and has channeled material support to the LNA, according to UN experts.

“The UN Special Envoy to Libya keeps denouncing the fact that foreign interference is one of the biggest obstacles to solving the Libyan crisis — he is a hundred times right,” Barah said.

What would be the impact on EU-Turkey relations?

Turkey’s pledge to offer military support to Libya comes at a time of heightened tensions between Ankara and EU countries on a number of fronts — not least, Ankara’s military intervention against the Kurds in Syria earlier this year.

Furthermore, Ankara and Tripoli signed their security and military accord at the same time as a separate memorandum on maritime boundaries that angered Greece.

Greece, which expelled the Libyan ambassador over the maritime boundary pact, has warned that Turkey is escalating tensions in the region.

“Turkey must choose if it will follow the road of self-isolation, continuing to play the role of trouble-maker in the region, or behave like a good neighbor henceforth,” Greece’s deputy foreign minister, Miltiadis Varvitsiotis, told Sunday’s Ethnos newspaper.

Greece has also condemned new Turkish gas exploration off the coast of the divided island of Cyprus.

But Barah thinks the EU’s reaction would remain limited if Turkey was to send troops to Libya.

” If it were to materialize, large-scale Turkish intervention in Libya would most likely bring about a series of European criticisms, but this would have little impact on Turkey. Europeans are too afraid of the reactions and leverage of the Turkish president, especially on migration issues, to push the boundaries too far against him”, Barah said.